INTERNATIONAL DOCUMENTS
In this section you'll find most of the main documents regarding the creation of the FREE TERRITORY OF TRIESTE and all subsequent international agreements that regarded this specific area of the world. Below you'll find the UN RESOLUTION, THE PEACE TREATY and THE LONDON MEMORANDUM. On your right side below the UN flag you will find many other documents regarding some international agreements that involves the FREE TERRITORY OF TRIESTE.
Before and after the Peace Treaty some meetings of  Great Powers Foreign Ministers were held, here below find the link to the report of the US Representative:
MEETINGS OF COUNCIL OF FOREIGN MINISTERS & PEACE TREATY - Reports

Alcide De Gasperi speech regarding the situation of Trieste and the Italian position during the Peace Conference in Paris.

Acceptance of the Statute of Trieste

By a letter of December 12, 1946, from James F. Byrnes, Chairman of the Council of Foreign Ministers the Security Council was asked to approve the articles of the Treaty of Peace with Italy establishing the Free Territory of Trieste. The matter was debated at the 89th and 91st meetings of the Security Council on January 7 and 9, 1947, and approved on the latter date by a vote of 10 in favor with one abstention (Australia). 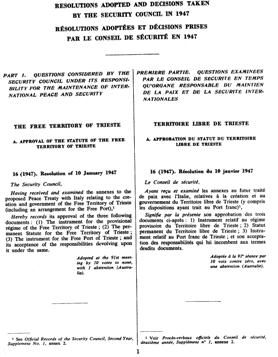 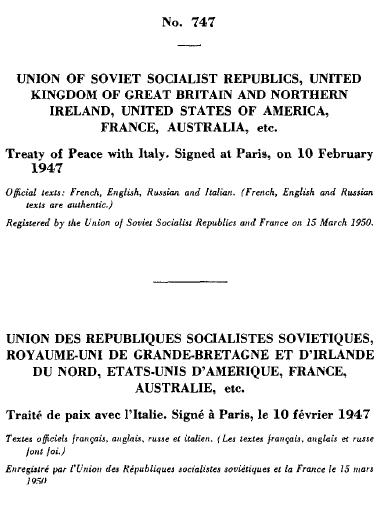 The FREE TERRITORY OF TRIESTE was established by PEACE TREATY as follows:

Article 21 - 1. There is hereby constituted the Free Territory of Trieste, consisting of the area lying between the Adriatic Sea and the boundaries defined in Articles 4 and 22 of the present Treaty. The Free Territory of Trieste is recognized by the Allied and Associated Powers and by Italy, which agree that its integrity and independence shall be assured by the Security Council of the United Nations.

2. Italian sovereignty over the area constituting the Free Territory of Trieste, as above defined, shall be terminated upon the coming into force of the present Treaty.

3. On the termination of Italian sovereignty, the Free Territory of Trieste shall be governed in accordance with an instrument for a provisional régime drafted by the Council of Foreign Ministers and approved by the Security Council. This Instrument shall remain in force until such date as the Security Council shall fix for the coming into force of the Permanent Statute which shall have been approved by it. The Free Territory shall thenceforth be governed by the provisions of such Permanent Statute. The texts of the Permanent Statute and of the Instrument for the Provisional Regime are contained in Annexes VI and VII.

4. The Free Territory of Trieste shall not be considered as ceded territory within the meaning of Article 19 and Annex XIV of the present Treaty.

5. Italy and Yugoslavia undertake to give to the Free Territory of Trieste the guarantees set out in Annex IX.

You will find the parts regarding Trieste through the links of the Annexes below (work in progress):

NOTE: The FREE TERRITORY OF TRIESTE (ZONE A & ZONE B) started officially on 16th September 1947.